Nepathya to rock Pokhara next Saturday

PATHLAIYA: Twenty-two-year old Ram Bahadur Bamjan, who is said to have been continuously meditating since 2005 and has been nicknamed the Buddha Boy, has been in the news of late for all the wrong reasons.

It has been only a week since his followers freed two women (one Slovak and another Nepali) after keeping them in captivity. But now, it seems, Bamjan has started taking matters into his own hands. The Buddha Boy reportedly turned violent and beat up one of his brothers yesterday night and sister this morning.

Bamjan thrashed his brother after he, along with his two brothers and some others, reached the Halkhoriya jungle to urge him to initiate action against those who had ‘sexually harassed’ the Slovak woman in captivity. A section of the media had quoted the Slovak woman as saying that Darshan Limbu of Bodhi Shrawan Dharma Sangh, an organisation formed to protect Bamjan, had sexually harassed her.

Those who had gone to meet Bamjan accused Limbu of wielding a sword to chase them away and Bamjan of thrashing the eldest brother Ganga Bahadur and holding Ganga and other two brothers (Dil Bahadur and Babulal) hostage. All of them were released this morning.

Bamjan’s sister Raj Kumari said her three brothers had visited Halkhoriya to tell Bamjan that unruly behaviour of some of his followers was tarnishing Bamjan and Sangh’s image.

Bamjan’s mother and sisters had reached the Halkhoriya jungle this morning. Bamjan’s younger sister Asali Lama said even she was thrashed by Bamjan. “He beat me up when we reached there to free our brothers,” said Asali. “Guru (Bamjan) hit me on my head but said nothing.”

Mayadevi, Bamjan’s mother, who coincidently shares her name with the mother of Gautam Buddha, said she was disappointed after the incident. “His activities have let me down,” she said.

Bamjan’s brother Dil Bahadur, however, said ‘some individuals with their vested interests’ were trying to tarnish Guru’s reputation. He added that appropriate steps would be taken to press the police administration to initiate action against Dinesh Limbu.

PATHLAIYA: A police team that had reached the Halkhoriya jungle to take stock of the situation on Monday morning bowed before Ram Bahadur Bamjan, paid obeisance to him and returned, leaving those who fell victim to Bamjan’s wrath seething. A police team led by Inspector KP Sharma, however, held discussions with members of Bodhi Shrawan Dharma Sangh. Upon his return from Halkhoriya, Inspector Sharma pledged to initiate action against the guilty if a case was filed but refused to go into detail. Bamjan’s aides did not allow mediapersons to carry cameras.

PATHLAIYA: Relations between Ram Bahadur Bamjan and his family had soured after the latter expressed dissatisfaction towards the working style of Bodhi Shrawan Dharma Sangh. The family was not in touch with Bamjan for the past one year. Bamjan’s sister Raj Kumari said Bamjan had distanced himself from the family after they began to raise voice against the wrongdoings of Sangh members. According to her, the family had also opposed Sangh’s decision to keep two girls — Dipshikha and Bishnu —inside the meditation centre. “Guru (Bamjan) dismissed our request to keep boys instead of girls,” she said. “After that we stopped visiting Bamjan, and they prevented us from entering the centre.”

South indian mystic sadhguru jaggi vasudev said that in one of the previous lifes, he threw stones at people (but carefully not hitting them),just the sake of chasing them off only. Now here it doesnt’ mean throwing stones at people is intentional violent Yamamoto, Japan

I think everybody should just leave him alone. His ‘supposed’ followers are the one’s taking advantage of this situation.If he wants to leave and be secluded, let him be, he just wants to meditate; which is very nice If he wants to preach he will, and ‘followers’ if they believe him so much should try to be like him and try meditate like him and become enlightened . Cristin De, USA

Time will see, don’t rush to judge Buddha Boy did something wrong. Cause he maybe right. People that not close enough to see what had happened don’t be a judge. Anton Sugiarto, California

poor saint… he is just sitting there and metitating 24hrs for world peace and non-violence. how can he be responsible for the actions of his so-called “followers”? he doesn’t have any “followers”. this news is a non-sense and seems like it is promoted by the same group that was trying to stop him from STOPPING the most-cruel tradition of killing of thousands of buffalos in the name of religion in Gadi Mai Mela. We should stop this! I strongly urge the reporter to do a truthful reporting! Tirtha Raman, Kathmandu, Nepal

I am deeply saddened that this Guru is displaying such an ugly act of violence. Especially, towards females. His own brothers and sister. it is shameful to say the least. Religion is such a brutal divider of people. This Boy must be arrested. Glad I canceled my trip to see this young, disturbed man. it hurts me. Sarah Edwards, California

Don’t judge a book by it’s cover. Don’t be hasty with decisions. Dhrama Sangha is still a boy who has not seen much of the real world. I find it highly improbable that he could hit all these people. I don’t think he is crazy. Chili Chill, Milwaukee

I speak to his followers each day until they rejected me from their forum because I continuously tell them that this kid is not enlightened. He just has mere psychic abilities which do not mean anything in the wisdom of truth. He is full of violence while talking about peace. Never trust a person who preaches peace. The buddha boy is lost. And, I have said this from the beginning. Jason Thomas, USA 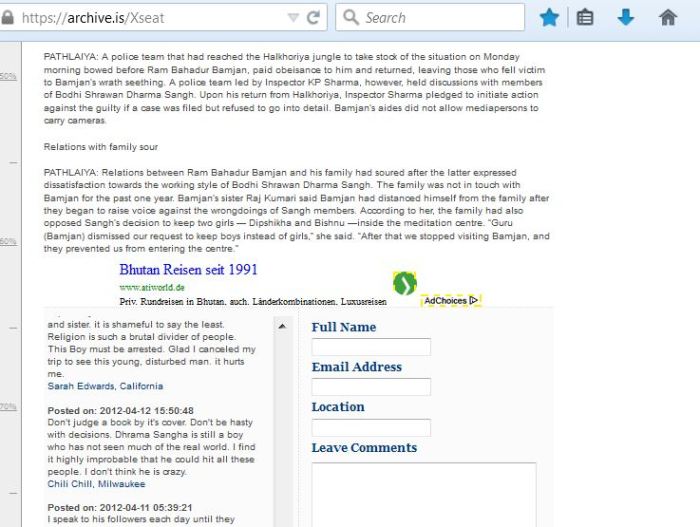 THE ORIGINAL OF THIS ARTICLE AT http://www.thehimalayantimes.com/fullNews.php?headline=Buddha+Boy+turns+violent‚+thrashes+siblings&NewsID=326582, HAD BEEN MADE UNACCESSIBLE.